A translation from the Doomsday Book for Week St. Mary, formerly known as 'Wich'

Welcome to the Duke of Cornwall

The village is mentioned in the Domesday Book, compiled in 1086 under instructions from William the Conqueror. It contains records of over 13,000 settlements. The extract for Week St. Mary appears alongside its 'English' translation. 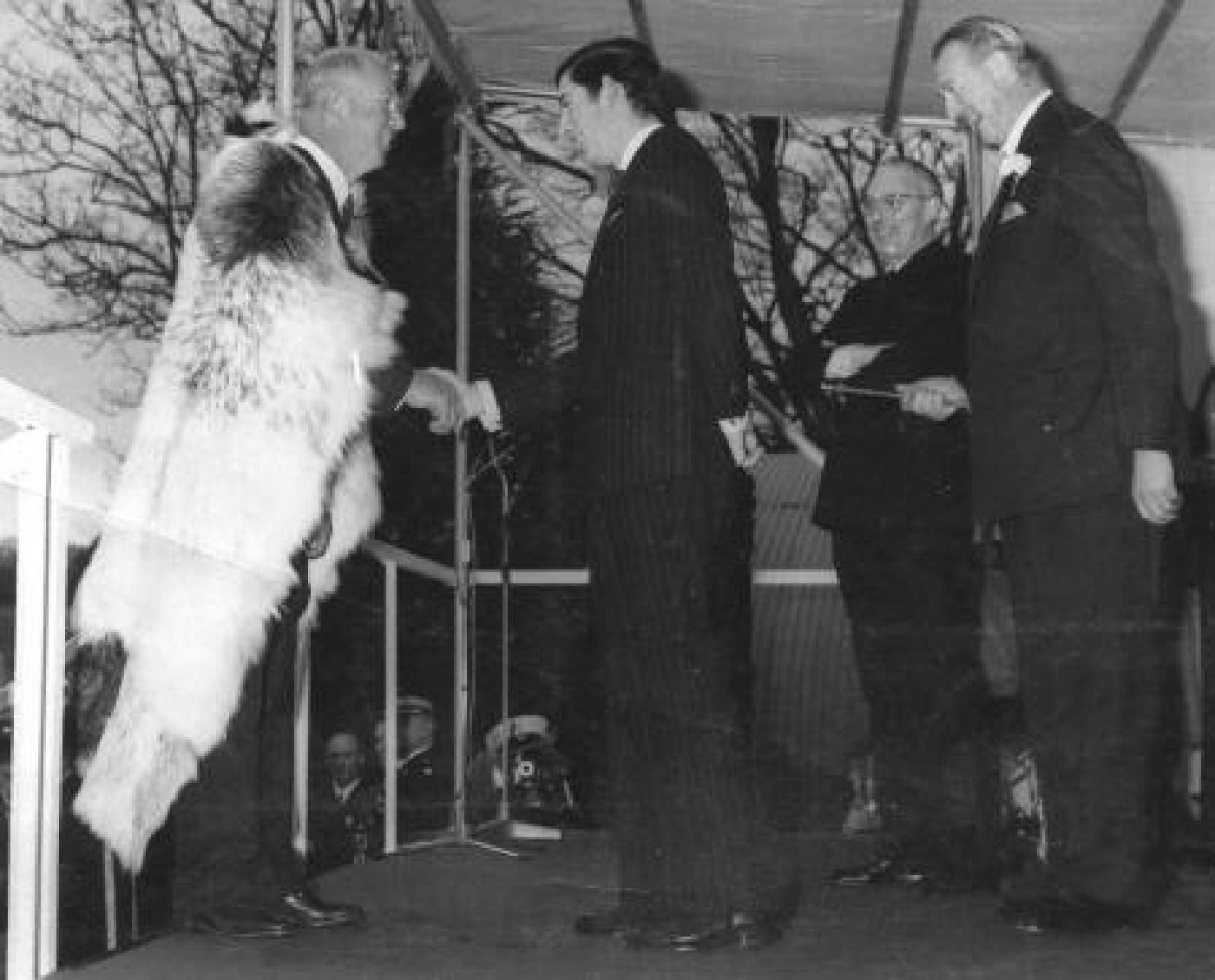 Launceston Castle features in the ceremony of the Dukes of Cornwall. In the 20th century, in their role as Dukes of Cornwall, both King George VI and the Duke of Windsor visited the Castle in 1909 and 1921 respectively.

The ceremony begins with the following announcement:

"Oyez! Oyez! Oyez! All manner of persons appearing this day within the Great Gate of this Castle and all persons that do offer Suit and Service to His Royal Highness, Lord of the Castle and Honour of Launceston according to the Ancient Custom thereof draw near and give your attendance."

Keith Hutchings, representing the Manors of Swannacott and Week St. Mary in the Hundred of Stratton held by Knight Service, appearing within goatskin mantles before the Duchy Court at Launceston, 1973.

Week St. Mary's Bethuel Hutchings, of Swannacott, was presented to the Duke of Windsor whilst wearing the goatskin mantle on his visit as Duke of Cornwall to Launceston on 25th May 1921. He repeated this honour by being presented to King George VI on 1st December 1937.

The King was already crowned when in 1937 he made a state entry into the Castle, being welcomed with age-old ceremonial affairs and presented with feudal dues - a pound of pepper and one hundred shillings, to name just two, which were set down in a charter of 1230 by Richard, King of the Romans, then Earl of Cornwall. Launceston Castle is run by English Heritage and owned by the Duchy of Cornwall.

William the Conqueror allocated Cornwall to one of his relatives, and by 1337 Edward III created the Duchy as an estate for the eldest sons of the monarch. This has remained the case down the ages, through 24 Dukes of Cornwall, to Prince Charles today. Edward the Black Prince rode into Launceston Castle in 1337 to be proclaimed the first Duke of Cornwall. This was the first Duchy to be created in England. Apart from owning large estates the Dukes of Cornwall claimed taxes from tin and other mineral rights. The taxes on tin continued until 1828, although after this date they still received income from mineral rights.

In 1760 the Crown gave up its estates to the nation in exchange for an income, but the Duchy of Cornwall estates were not included in this deal.

It was customary for certain people to meet with the Duke of Cornwall and present him with gifts appropriate for his visit to his County, although not all of the gifts would be of much use today. Prince Charles became Duke of Cornwall at the age of 4 when his mother ascended the throne. However it was not for another 20 years, in 1973 that he was actually proclaimed Duke of Cornwall in Launceston Castle.

• On the 19th November 1973, the Manors of Swannacott and Week St. Mary in the Hundred of Stratton held by Knight Service, and their representatives appeared within goatskin mantles before the Duchy Court at Launceston. Bethuel's grandson, Keith Hutchings, represented these Manors.

The Manor of Cabillia was held by the service of paying to the Duke one grey cloak as often as he should pass through Cornwall and the Manor of Pengelly was held by Serjeanty of receiving the grey riding cloak when the Duke should be coming towards Cornwall and of carrying that cloak with the Duke throughout all Cornwall.

Then the Bailiff recites each Tenant, his holding and the rent offered, in token, in recollection of days long past and each Tenant in turn presents his rent in the following order:

Having given each a white rod, His Royal Highness then says:

"I hereby confirm you, and those you represent, Tenants and give you and them peaceable and quiet seizin and possession of the Manors, Lands and Tenements which you hold or represent according to ancient custom."

Then the Bailiff says: "Let every man depart and keep his day here upon a new warning and so God Save The Queen and the Lord of this Honour."

Most of the inanimate objects can be seen at Launceston Museum.

Some feudal dues as presented to the Duke of Cornwall, pictured by the archway to Launceston Castle.