In the early 50s one of the main businesses being conducted, right in the heart of the village, was that of Mr. Bate's Honey Stores. His place of business was a long stone building, once the stables belonging to the Rectory. This business he carried on for over 45 years, producing many gallons of fine honey and mead.

Recently, a small home-produced booklet came to light, outlining a brief history of Bate's Honey and it is with thanks to the late Mr. Bate's family that it is reproduced here: 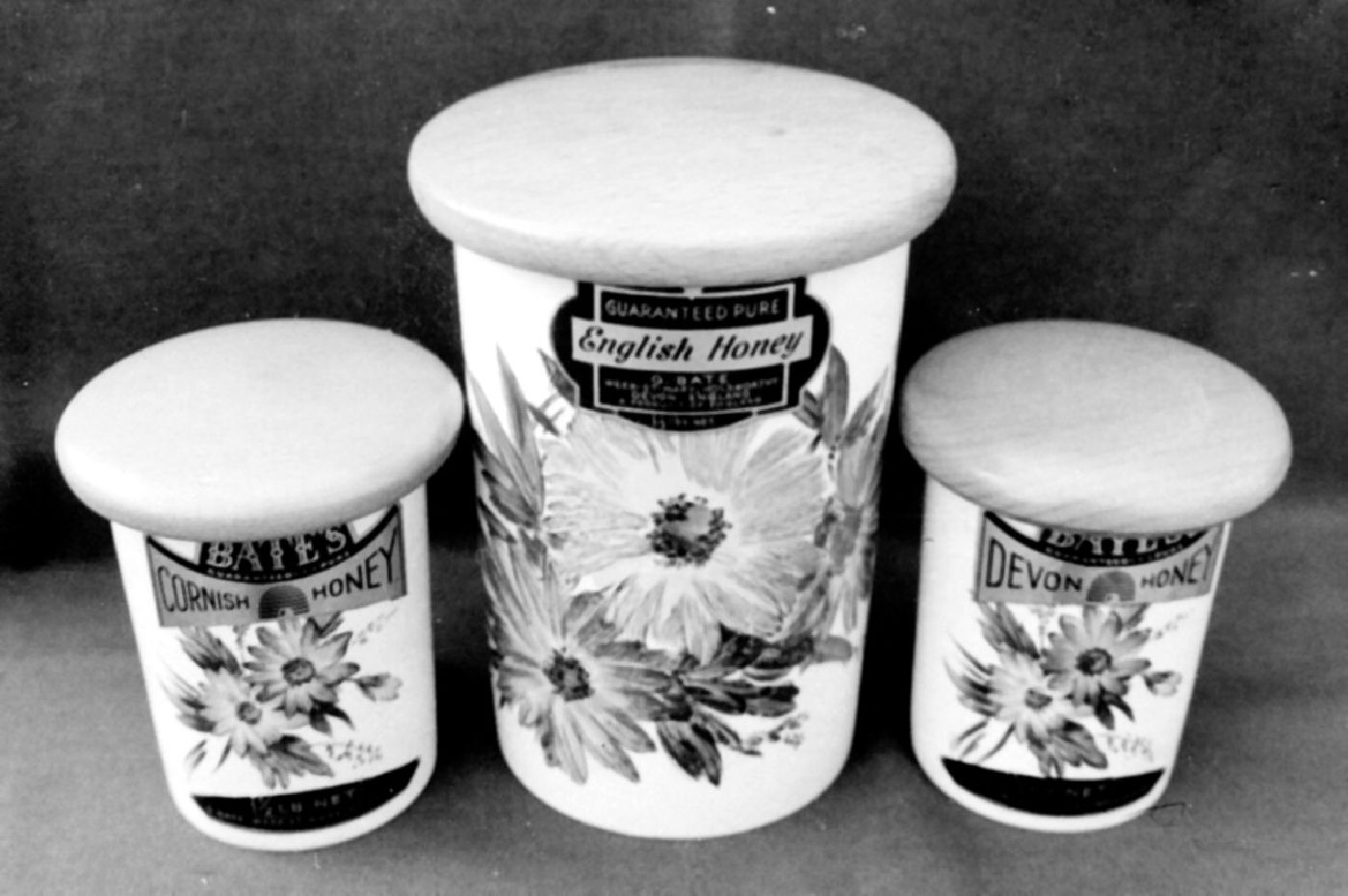 YOU DESERVE THE BEST WHY NOT GET IT

Cornish & Devon Honey - Mr Bate had beehives in both counties

The story of Bate's Honey

As a keen naturalist during his early boyhood days, Mr. Gordon Bate spent many hours listening to the hum of the large Bumble and Native Honey Bees foraging for Pollen and Nectar in the huge Sycamore Trees which surrounded his birthplace in Cornwall. This aroused his curiosity immensely and, whilst still at school, his Father purchased a hive of Bees, and later in the early 1930’s he became established as a beekeeper. As those early years developed so the Bees increased in numbers and the story of Bate’s Honey began.

WHERE IT IS PRODUCED

The delicious honey is gathered by British bees from numerous apiaries situated in valleys, orchards and wood1ands lying within approximately a 25-mile radius of the little village, which dates back as far as the early Saxon times, known as Week St. Mary, in the Southwest of England and on the borders of Devon and Cornwall, separated by the glorious Tamar Valley with its waters flowing into Plymouth Sound.

CLOVER AND FLOWER HONEY – ALL ABOUT IT

Far from any industrial towns, this area provides a perfect environment for the Bees to produce a delicious soft, light coloured, creamy honey, which is ideally palatable for everyone, and for which England is famous.

Because our Climate is so unpredictable, quantities of this honey is often limited, and only the largest beekeepers are able to maintain a steady supply. The unique flavour of our West Country honey gathered by our hard-working honey bees is due to the English climate varying so considerably from day to day. The bees are often forced to find new sources of flora which yields nectar at lower temperatures, and having derived from such a variety of flowers, our honey has a distinct appreciable flavour.

Often the bees fly many miles a day before finding a rich source of nectar and even though strong breezes from the Atlantic may prevail, they are tough and do not retire to their hives until many loads of nectar have been safely gathered.

The honey is then removed from the hives and extracted from its pearly white combs using the latest modern equipment. It is then carefully stored in bulk, until we are ready to bottle it for your table use.

In either direction, on yonder hills, the moorland landscapes can be seen. To the East, lies the Devonshire highlands of Dartmoor, and to the South-East, the Cornish Bodmin Moors.

It is in these areas that the rich Ling Heather thrives, providing a magnificent purple carpet covering many thousands of acres of hills and deep Valleys, flowing with crystal clear waters. In early August our hives are transported to these moors, packed with vigorous bees, and between the morning and evening mist some very delicious nectar is gathered.

This honey has such a high density that it is not possible to extract it from the comb direct, as other honeys, but the quality and richness of flavour of the heather nectar gathered from these South Western Hills, more than compensates the bees for the extra work involved. On some days the bees are only able to forage for a few hours.

To conclude - Bates English Honey has a freshness, purity and flavour often unmatched by any other. It soon stabilises after bott1ing and can be made clear by gently warming whether you buy it Set or Clear according to your taste, it is still the same honey.

ITS VALUE AND USES

Once honey is eaten it releases an immediate supply of energy. It is an invaluable food for those doing tiring work. It will aid and soothe digestive troubles. Athletes eat it before their races. Children love it, and it gives much pleasure and satisfaction to older people as well. It is said that babies grow better when fed with honey instead of sugar.

There are many recipes in which honey can be used where sweetening is required, and we feel sure that Bates honey will satisfy and fulfil all your future requirements.