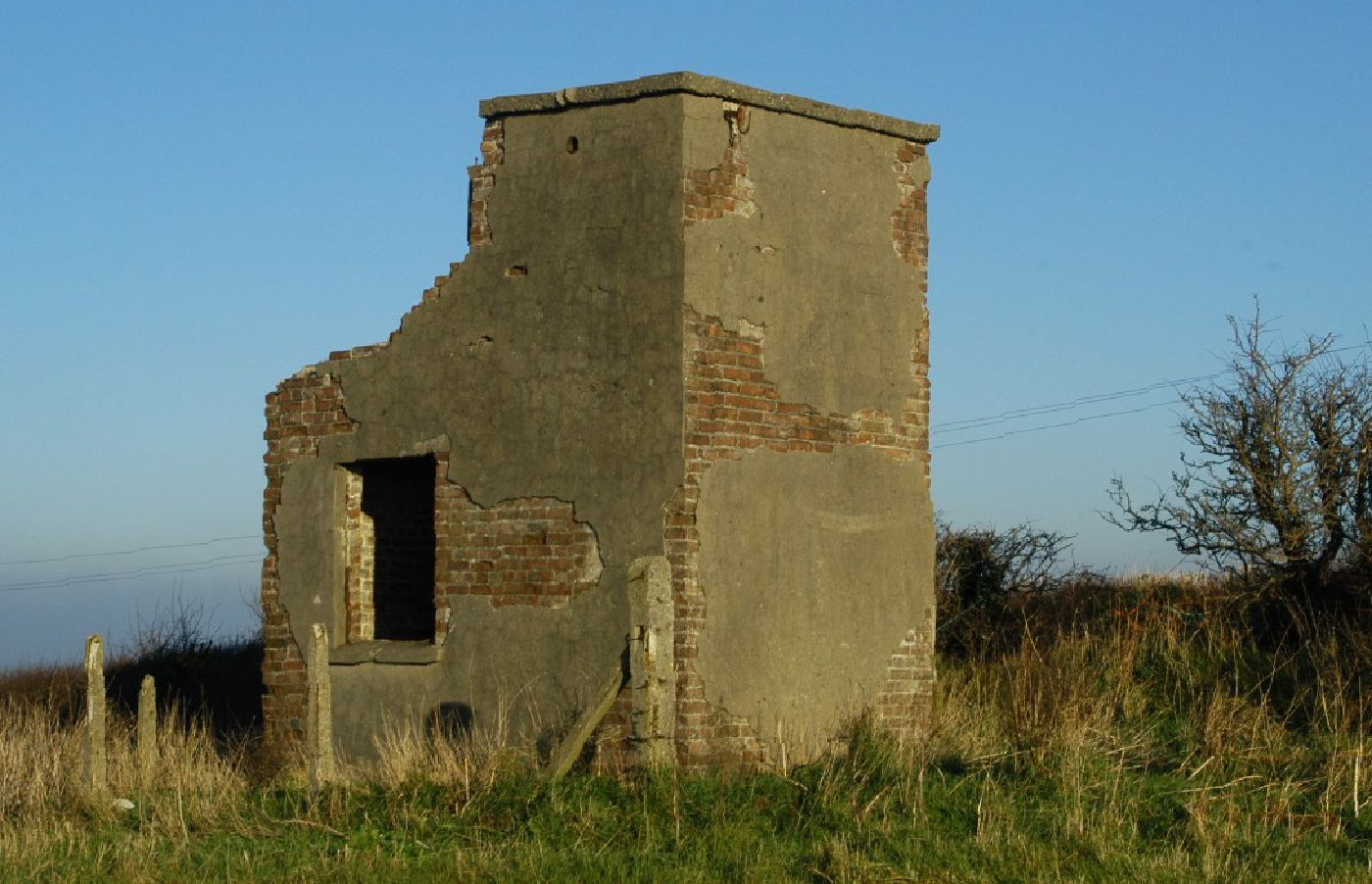 The Royal Observer Corp lookout post has been neglected for some time and if not maintained will undoubtedly lead to demolition on the grounds of safety. To the Northwest of Week St. Mary, on private land, stands a disused Royal Observer Corps Post. This has been there so long that we accept it as part of our landscape.
This landmark is set high on a hill and is clearly visible as we approach the village from Week Orchard or Treskinnick Cross. It is usually referred to as the Lookout Tower or the Observation Post. Officially, it was designated as N2 of No. 20 Group, Truro.
When the Observer Corps first established a Post at Week St. Mary in 1941, a flimsy wooden structure was erected. The present brick tower was built three years later in 1944.

The first Cornish post was established at Veryan in January 1940 and was soon followed by others. By 1942 there were 36 aircraft recognition and reporting posts in Cornwall. Across Britain there were over 1,600 reporting posts and these were connected by telephone to one of thirty-five operations rooms. These in turn, passed on all aircraft movements to their appropriate RAF Sector Operations Room. A limited number of Observation Posts, three of which were in Cornwall, were equipped with High Frequency radio equipment. This communication could be used to contact air-crew, who were lost or in distress, and helped to save lives and planes.

Although the Week St. Mary tower has deteriorated with age, its layout is still complete. The area was once fenced off from the public with barbed wire. Some of the concrete posts are still in-situ. Its structure is brick built and of two floors. Sleeping accommodation was on the ground floor with a stove for warmth. The hearth and flue pipe exit, are still clearly visible. The original external wooden steps have been missing for many years. These led to the upper-floor, which contains a shelter and the observation platform.

Originally linked by telephone, a rusty hook-up bracket is still visible at the top of its South West corner. A more specific feature to have survived is the chart post. This reinforced concrete pillar supported the large brass, plotting chart on the upper floor of the tower. This was used to plot the direction of aircraft movement. Observers were experts at identifying aircraft and this information used by the RAF to intercept enemy planes.

At the end of Word War II, Week St. Mary along with other posts was stood down. However, only a couple of years later in 1947, it was reactivated. At first its previous aircraft recognition work was its primary role, but as weapons became more sophisticated the Observer Corps’ role gradually changed and along with this a new type of structure was needed. This later structure is not so clearly visible. Despite neglect and some vandalism, Week St. Mary’s WW II Observation Post has managed to keep its aircraft plotting chart post. Even more unique is that it is a World War II reporting post that still stands alongside its later Cold War monitoring station.

Children have recently done some considerable damage kicking out the upper parapet wall. Not only are they putting themselves at risk, but have damaged an important part of our local heritage. There is a high probability that the structure is unsafe and children should be discouraged from climbing it.

The Royal Observer Corps Association has recorded details of both posts in their work which is now lodged in the Defence of Britain Project and held by the Imperial War Museum at Duxford.

After the Royal Observer Corps was reactivated in 1947 their role was to gradually change and in 1953 the Week St. Mary post was re-designated as 132 of the re-numbered No 10 Group Truro. From 1955 the Corps was given the new role of detecting and reporting nuclear attacks on Britain. They were to become part of the United Kingdom’s Warning and Monitoring Organisation (UKWMO). The threat from the Soviet Union had now become Nuclear and from 1960, observation posts and operations rooms were placed underground. By 1963 aircraft-reporting had virtually disappeared and from 1964 the role of the ROC was entirely Nuclear detection.

In June 1960 Week St. Mary’s observation tower was discontinued. A new below-ground post or nuclear bunker was constructed only a few yards to one side of the original observation post. Nuclear monitoring and training was carried out at Week St. Mary and continued until October 1968 when a restructuring programme reduced the number of ROC posts to 875 and operational rooms to 25. It was at this time that the Week St. Mary’s branch of the Observer Corps was stood down. The site was closed down and the bunker abandoned.

The bunker is constructed to give almost total protection against nuclear fallout. It is built out of concrete twelve inches thick and six feet below ground level. Access to the bunker is gained through a counterbalanced steel trap door. A steel ladder services a vertical shaft two feet square and fifteen feet deep. To prevent the ingress of water, the concrete vault is tanked on the outside with a bitumastic layer. Even so, a vertical pipe and hand pump was fitted to cope with any flooding that might occur. The bunker was equipped with radiological equipment to observe nuclear bursts and to monitor radioactive fallout. The fifteen feet by seven and a half feet bunker was also designed as a survival unit so that three observers could live for up to three weeks below ground. Ventilator shafts provided an air supply and batteries supplied the electrical power. There is little to see of this Bunker from above ground level. Its main structure still ‘appears’ sound. The limited amount of equipment that had been left behind has rotted in the damp atmosphere. Unfortunately some finer details of the ventilation grills have suffered from unnecessary vandalism. By the late eighties communism became less of a threat and the Soviet block started to collapse. The last of the Observation Corps posts finally stood down in September 1991.

A good view of the tower can be seen from the road and is more clearly visible from the lane. This is, however, on private land and it is hoped that those reading this article will respect this.  We thank Bob Booker for his communications with the ROC Association and Lawrence Holmes (Truro Branch ROC) for providing the information from which this article was taken.

If anybody has old photographs of the tower, or information regarding those who manned either of the two observation posts, or any information at all, please contact us.