'As I knew it' by Audrey Tarrant 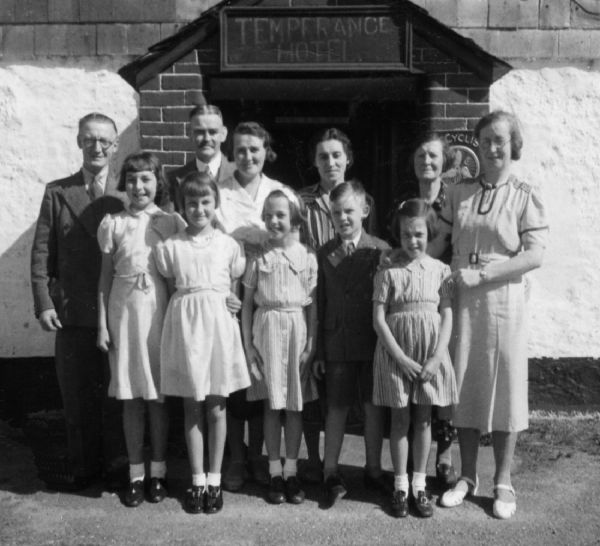 Mr & Mrs Masters with some evacuees and Christine pictured outside the entrance of the Temperance Hotel, taken around 1940 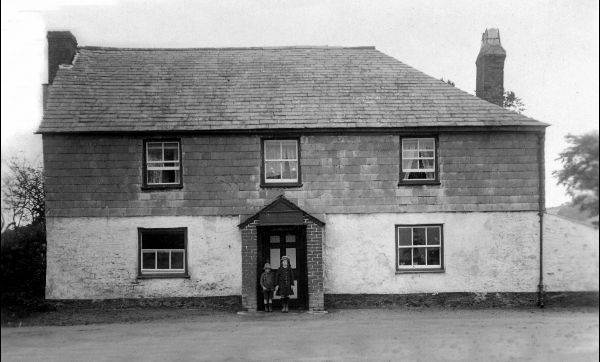 I don't know when the building would have been erected but the photo taken with Christine and her brother Tom standing in the porch was in the 1920's. 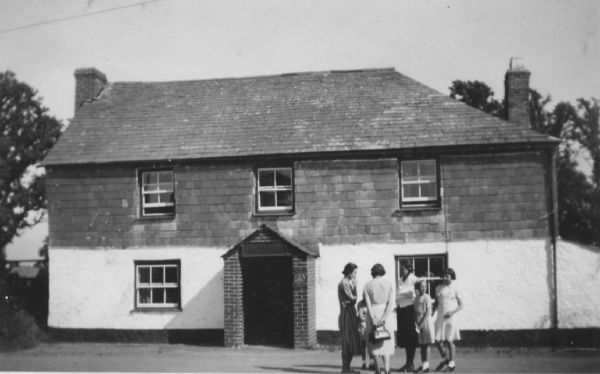 Another picture of the Temperance Hotel - some local women passing the time of day in their summer clothes. Taken in the 1940s.

In 1940 when I was billeted there, the Temperance Hotel was in The Square and was owned by Mr Ned Masters and his wife Lillian. Ned was at the time the village blacksmith, and Lillian handled all the day to day running of the 'hotel' with the assistance of daughter Christine (who later married Den Treleven).

As one entered the front door there was a very small hall with stairs going straight up, the main living room was on the right, through which access was to a small sitting room and kitchen. (Mrs Masters would call this something other than kitchen, but I cannot remember what it was). The main room had a large kitchen range with an oven in it, where all the cooking was done. A big black water container (which was known as a 'fountain') would always stand on the top. This had a tap on it and would supply all the hot water needed - (constant hot water!). Christine did most of the cleaning and all the baking. Mrs Masters did most of the daily cooking also on the range, and this would be increased on Market days when farmers would gather around the large table for the home cooked meals. I was always intrigued by the very long table in this room, (which most of the local houses had at the time), this was a plain wood side for everyday use and turned over on Sundays to reveal a dark polished surface.

The small sitting room at the back was for everyday use and was a very happy place to be on a cold evening as it was so snug there with always a roaring fire. As well as us residents using it, soldiers from the army camp, which was in a field on the Goscott road, would come for 'home comforts' in the form of hospitality, cups of tea, home baked cake and games of cards. It was always crowded in there!

As the Temperance Hotel was the only caterer for the farmers on market days, I assume there must have been extra rations given for this, because we never seemed short of food of any sort.

Also I think many a horse would have new shoes fitted for the price of a side of pork from a home-slaughtering pig farmer, or for a big bag of apples etc. There was always plenty of milk and cream which was fetched daily from Bill Haydon's farm in jugs and dishes. We ate very well especially with Chris doing 2 bakings each week of Saffron and Yeast Cakes, Pasties, Fruit Pies, Scones and Biscuits there was always a full table.

Preparation of all food took place in the kitchen where there was an enormous dresser loaded with china on the shelves and in cupboards. Washing up was carried out in an enamel bowl on a large table with a tray as a draining board, eventually the waste water was thrown down the yard from the top of the back steps - no drains! We were lucky to have a water pump outside the back door, because so many others around the square had to fetch it from the village pump. As did the men from Sandercock's bakers, who fetched it twice daily in a large barrel on wheels.

Upstairs there were 5 bedrooms, one had a section off it which accommodated a chemical toilet. This was another of Chris's jobs to empty the pan daily - there was an outside toilet in the back yard for the use of the men (and me when I came in covered in mud!).

Electricity was in the downstairs rooms only, we had to take candles with us when going upstairs, and I believe the downstairs installation was quite recent. There was only one centre light in each room, no sockets for table-lamps, electric irons, vacuum cleaners etc... All the ironing was done on the 'everyday' side of the long table, and flat irons were heated on the stove.

Market Days were always very busy inside and outside. All around the Temperance was the cattle Market, and the 'office' for the auctioneers was the back sitting room. Meals were served by Mrs Masters and Chris to all the farmers on market days, which seemed to be once a month with grading days fortnightly. So you see, there was always a lot of 'comings and goings', not only inside the building, but out in the square and market place with cattle trucks bringing the animals and putting them into the pens, especially when the pigs were squealing in protest. The sheep pens at the back were a good meeting place for us children and we had many 'clubs' formed and abandoned there.

As Ned Masters was the village blacksmith, he was kept very busy shoeing horses and mending equipment for the farmers. He was very popular with us children and we would rush down from the school most days to help him by working his bellows for him. His son George (who I believe took over from him eventually) was working away near Launceston during the weeks, but came home every week-end to help Ned out.

After the death of Mrs Masters in 1947, Chris married Den Treleven and moved to Steele Farm. In the meantime the Temperance was taken over by a Mrs Charlick who in 1949 started to provide lunches for the village school children each day. After about 6 years there was to be another change when the ownership passed to Doris Edwards (neé Smale) and her husband, John (Jan), who continued with the farmers lunches and the school dinners. This was to finish when the school closed in 1973 and the Cattle Market was finally closed in January 1987. The whole site was then developed into the modern houses seen there today.

Previously, the Temperance Hotel was called The Tree Inn, and was under the ownership of Mr. John Staddon and here is an interesting article concerning his son Fred, who left Week St. Mary to work in Bude at the blacksmith's shop on the wharf:

Seventy-three-year-old Mr. Fred Staddon, from his smithy on the lower wharf of Bude Canal, has watched a changing world through the eyes of a philosopher.

A very different world it was back in 1910 when he went to work in the blacksmith's shop of the late Mr. Jim Rowe before taking a lone hand in 1913. For these were the days of sail: of the "Ceres" (the first boat to have motors fitted), the "Jessie" and the "Agnes" and scores of their type, plying their trade between Liverpool, Swansea, Newport and Wicklow and sailing into the port of Bude with precious cargoes of coal and manure.

Mr. Staddon has seen as many as seven or eight of these fussy little coasters moored up at one time while the port reverberated with activity and knots of leather-skinned seamen gathered outside his "shop" retailing the news of the day.

Sometimes when stormbound, and until motor power came in, the vessels would lie at their moorings for weeks. But most times it was a short stay, ended just as soon as their holds were filled with the golden grain of the Cornish harvest.

At that time, a tiny railway ran from the beach to the wharf, a horse drawn conveyance bringing sand for ballast for the ships travelling empty down channel.

Mooring swivels and shackles for huge wooden buoys were the order of the day for Mr. Staddon. He wrought all the iron work in 1920 for the inner lock gates. He acted as ships' smith. He carried out the many commitments for the town's two wheelwrights and he made many of the harrows and ploughs and door hangings ordered by farmers.

Then there were the horses. Milk-cart ponies, coaching horses, posting horses, cart horses. Mr. Staddon shod the lot and loved every moment he was in the forge, and still does. He is tough enough to have survived fifty years of it and his cheerful eye and mind makes him fit for many more.

To-day the waters of the canal curl lazily along its banks and when it is not being used as a pleasure pond for boating its heart is silent. There is still plenty of work for Mr. Staddon, but the emphasis has changed. Now he is repairing the things he once made and there is a demand from local garages for such oddments as motor springs, he can also turn his hand to such commercial ventures as "lucky horseshoes", made from copper, and door knockers made of steel horse-shoes.

Mr. Staddon, a Week St. Mary man, whose father, the late Mr. John Staddon kept The Tree Inn there, left school at eleven and still works five days a week in his forge. If he has any leisure, he uses it up on the Bude golf-course - his three sons and a grandson complete three generations of a keen golfing family - in his garden, and in another of his great interests, the showing of cage-birds. With his Yorkshire canaries which he has bred since he was 13, he has won championships at Bristol and Bideford and several other places.